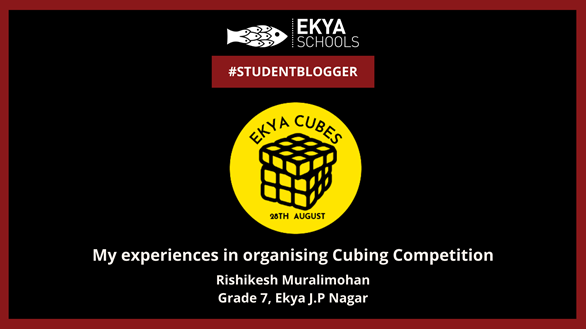 As a seventh-grader, this was the first time I ever conducted a competition for a large audience. This cubing competition has taught me a lot, from how to organize an event to how to host a user-friendly website. After successfully conducting this event, I started to think more about how all of this started.

Sometime around September in 2020, my friends and I connected over our joint interest in solving the Rubik’s cube. At the time, there were only three of us.

We liked to share our talents with other friends in our class and hoped to inspire some of them as well. I think that we impressed a lot of non-cubers because a few months later, we had more than ten people in our grade who could solve a Rubik’s cube. That got us thinking; If ten people in 7th grade knew how to solve the Rubik’s cube, imagine how many people on all our campuses would know how to solve it. This was the initial thought that sparked the idea of a cubing competition. What’s more fun than competing in an event that you love!

At the time, we never anticipated hosting a website or parsing through the Google sheets API to compute the results or live streaming the finals of the cubing competition to a large audience, yet it now seems like something we could do effortlessly.

We started in January 2021 where we first made our competition form. All this form did was show a scramble and let the user input their solve time in there.

Fast forward to July 8th, 2021, we proposed the cube competition and sent it to our CCA Coordinator: Shanthi Sivaram. In the spirit of full disclosure, it was her help that eventually helped us organize this competition. In case you want to view it, the proposal is here.

Later that afternoon, we figured that we needed to host a website for the user to experience enhanced clarity and so that it’s easier to view the results. Because we were on a time constraint and figured we just needed a simple website, we decided to use https://www.sites.google.com.

On our website, we included information about the competition, the rules, regulations, and of course hype videos, trailers, and flyers. The website is here in case you want to view it.

By Aug 15, 2021, we had finalized the website. We built it such that it had five tabs (Home, Schedule, Compete, Results, Rules).

Two days after we opened the form, we had only 1 participant. We had frankly anticipated more participants. Would we be able to proceed with conducting this competition? Was this all a premature idea? Had all of our planning gone to waste? These were some things that were weighing on our minds during that period of time. But 3 days later, (to our relief!) the participation numbers had exponentially increased to the point where we had more than 30 participants in our competition.

But on the last day (August 23) we ran into a problem. A critical oversight that we somehow didn’t think of. Our google drive had run out of storage space. It all seemed quite expected in retrospect considering that almost every recording that a participant uploaded was more than 200 MB and our meager 15 GB of google drive space just couldn’t handle it. The mistake that we had made was using our personal accounts to run the competition rather than our school account (which had unlimited storage). As a result of insufficient storage space, the form had closed and was no longer accepting submissions even though there were a good three hours before we had scheduled it to close. We eventually had to move all of the recordings to our school accounts manually, and this was as gruelling as it sounded. In my opinion the bigger the setback, the more likely you are to not face it the next time, which will be true in our case.

Once the competition forms had closed, we had to start planning for an even bigger occasion which was the live stream. The top 8 participants qualified for the finals and this was based on the top 8 fastest solvers in the qualifiers.

The go-to software for live streaming is undoubtedly OBS Studio. We were lucky enough to have fellow 9th grader Krishna Ramasimha help us out with the streaming portion. In addition, we had the experienced 10th graders, Skanda and Sutej, pitch in and help us judge/moderate the event.

The live stream was supposed to be conducted on a website called OBS.ninja. This is by far the most powerful platform to conduct the event because the participants can show his/her video and share his/her screen with us which is critical to maintaining honesty and integrity within the participants.

The finals were scheduled to be on Aug 28, 2021. We invited all of the participants to a meeting and invited teachers from other campuses to our dry run.

Although using OBS.ninja seemed like an able idea, it was way too complicated and we found it really difficult to organize the event on such a user-unfriendly (yet powerful) platform. In the end, we decided to stick to our trusty old friend, Zoom. Conducting the live stream on Zoom meant that it would be harder to stream the event, but easier to conduct the event.

The finals were meant to be in a head-to-head format, but in the end, we decided to save time and make the finals a ‘best average of two solves format’. The participant who was solving would need to focus his/her camera on his cube and share his screen simultaneously. This was a lot easier for the participants to do, and made our process a lot simpler.

The night before the competition, we all slept crossing our fingers and hoping that the event would run smoothly.

On the D-day, we were up early and ran through our final checklist.

The stream started, the enthusiastic finalists logged in all wanting to be the best cuber among them. It was the moment of truth, all our efforts were culminating in this one hour! It began as planned. To keep it interesting, in between the solves, we interacted with the audience and other cubers on their thoughts on the pandemic and many other related questions. We had to coordinate many events backstage like sharing the scrambles in the chat window with each participant getting a scramble of equal difficulty.

I think that our prayers were successful because we were able to pull off the event with no major hiccups.

It was a nail-biting finish complete with having to verify the videos for their veracity before declaring the final winners. You can find the live stream here.

And that’s my story. I would like to re-emphasize the fact that this competition has taught me a lot not only as an organizer but also as a person. I learnt how to convey a negative message in a positive manner without hurting anyone’s feelings and despite being strict, I ensured that all the participants were happy in the end, and it was just for everyone.

Another silver lining in the Covid Pandemic cloud is the fact that we all have a little more free time than we used to, and what better way to use it than to learn new skills!

Looking forward to EkyaCubes 2.0, and hoping to see you at the event! Happy cubing.