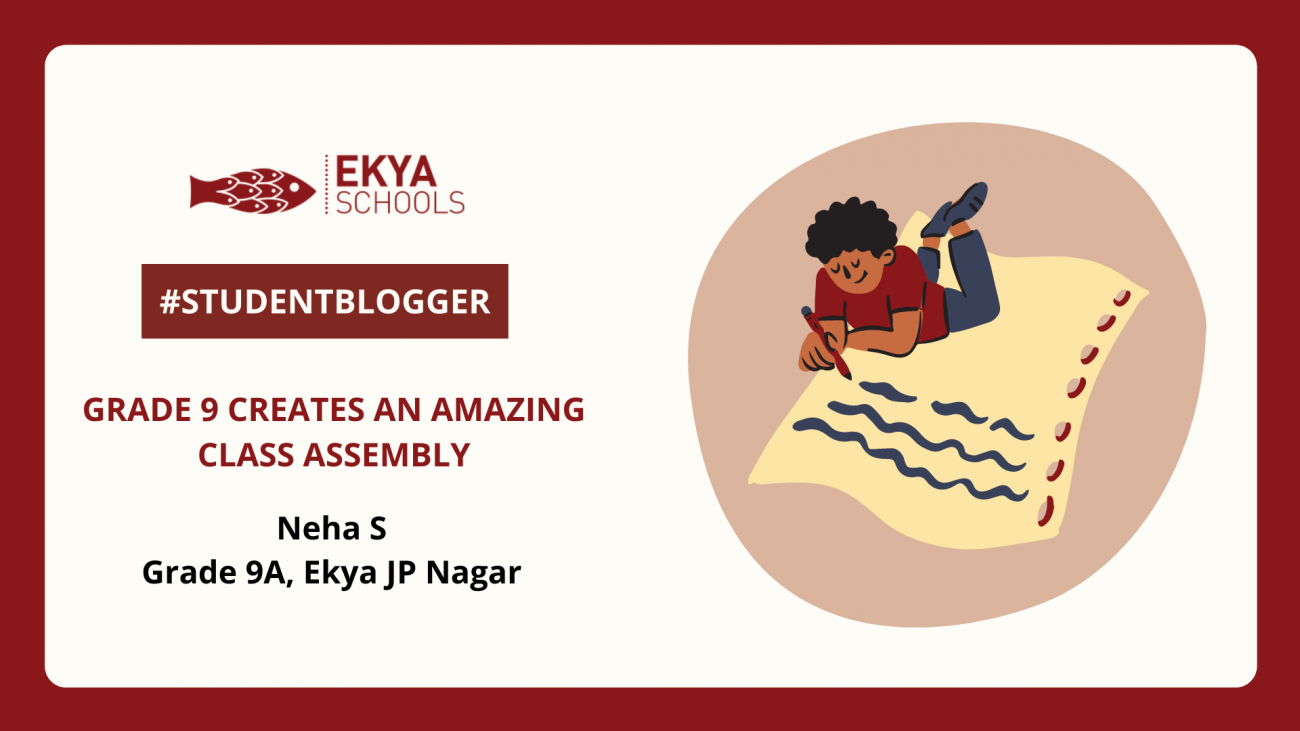 Hello there! Have you ever wondered how a class assembly is made? How are the tasks segregated, and how the final performance must be as smooth as silk?

Well, explore with me, as I brief you on the process of how Grade 9 creates an amazing class assembly.

A class assembly is a gathering of students in a class, where several activities are held. Festivals, Music, Topics of Awareness, and Events in School are some of the themes that most class assemblies are based on. Though virtually, we, the students of Grade 9, focused on preparing our class assembly on the theme of ‘Father’s Day.’ The month of June holds various special days such as – International Yoga Day, International Olympic Day, Father’s Day, and so on. We, Grade 9, had decided to celebrate the unsung heroes in our lives – our Fathers.

This is how the assembly preparation went about. On the first day, we held a combined meeting and brainstormed on ideas that could work as the theme for our class assembly. After hours of contemplation, we settled on the theme of ‘Father’s Day.’ Our Fathers provide us with countless items throughout our lives and so, we decided to let them take the spotlight for this year’s class assembly. Now, how were the tasks and responsibilities divided? We wanted the entire of Grade 9 to participate in this class assembly so we could include everyone’s skills and talents. There were 5 groups created, – The Script Committee, The Planning Committee, The Editing Committee, The Music Committee, and The Message Committee.
The class was divided into these groups based on their preferences and abilities. The Script Committee dealt with the script-writing of the class assembly. They wrote the plot of the skits and arranged the order of the assembly. Next, the Planning Committee handled the entire assembly by giving updates and by maintaining the flow of the assembly. The Editing Committee assisted in editing all the raw skit scenes and collages. They also helped in enhancing the overall performance of the class assembly. Moving on to the Music Committee, all the musically talented students were brought to this group. Together, they had to compose a melodious song that would go along harmoniously with the class collage.

And lastly, the Message Committee. I was put into this group and I had to create Father’s Day Messages! I started by taking two A4 sheets of paper and attaching them together to create a larger paper. Here, I selected a Father’s Day quote by Nelson Mandela and wrote it on a blank canvas. I also adorned the message with bright colours and annotations. “To be the Father of a nation is a great honour, But, to be the Father of a family is a greater joy.” This is the quote that was selected, and there were eight others in my group who also came up with captivating quotes.
For the next two weeks, our class was busy preparing for the assembly. There was strenuous recording, editing, designing, and many rehearsals that took place. Despite the hard work, everything came into order perfectly. The MC’s were ready, the skits had been recorded and edited, and the messages were also displayed.

On the day of the class assembly, we were all tense but excited to present what we had worked hard for. I was personally nerve-wracked and wished my classmate’s good luck. After fifteen minutes, our class took a deep breath and noticed the virtual round of applause given by the audience. The class assembly went seamlessly and ended on a good note. I was delighted to participate in this class assembly and make an observation on it. There was a lot of cooperation from my fellow classmates and my teachers, and together we were able to pull off this show! This was an amazing experience.