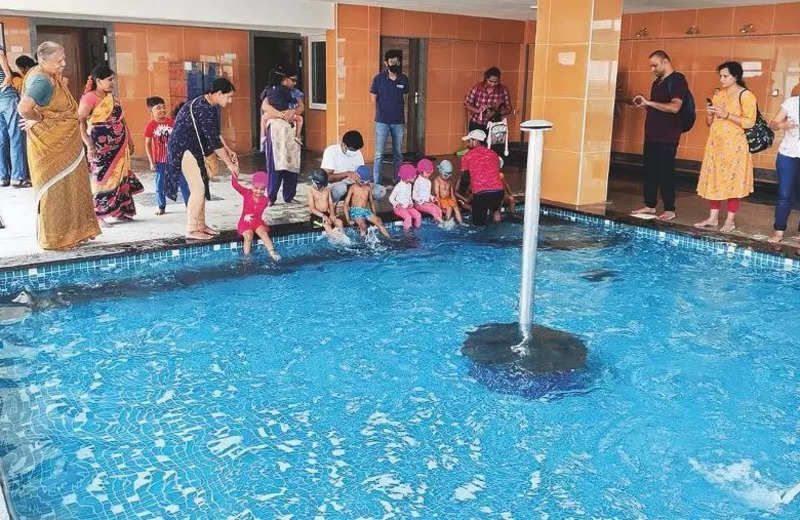 BENGALURU: With the fall in Covid-19 numbers and the easing of most restrictions, summer camps are back after two years and parents are enrolling their children in various activities. Swimming has returned as a popular choice, with parents saying it helps their wards stay healthy and is an important life skill.

Umesh Marnad, a businessman, has enrolled both his children — aged six and nine – in swimming classes at a pool in Koramangala. “I want them to compensate for the lack of physical activity in the last two years. I think swimming is a great full-body exercise and is good for height growth,” he said.

Ashok, manager of Chitrakoota Kaushalya School & Swimming Centre, said students are excited to be back on the ground and especially for swimming classes. With fully booked batches until the end of June, Ashok said the demand has forced them to add more batches and even introduce some for adults.

“The sweltering summer has added to the demand for swimming. Children are wary of playing outside in the sun, but swimming is an attractive option as they get to play in the water,” he said.

Joyita Chatterjee, principal of Chitrakoota Group of Schools, said: “Parents also sit back and watch their kids enjoy themselves in pools.”

Homemaker Sangeetha BN’s nine-year-old son was adamant about going for swimming classes. “His demand started a year ago when covid was still at its peak. We could finally enrol him now,” the Basavanagudi resident said.

Other courses have also gained popularity this year.

Ayesha Sirajuddin, head of South Campuses, Ekya Schools, Bengaluru, said that apart from swimming and basketball, chess is popular among those looking for summer courses. “Basketball, throwball, robotics, public speaking, skating and karate are also sought after,” she said.

Farah Nasir, founder of English Hour Academy at Benson Town, said both online and offline classes are popular among parents. “The courses sought after include personality development, creative writing, effective communication for adults and language skills,” Nasir said, adding that some parents are still waiting for schools to reopen to send kids for offline classes.

Aloysius D’mello, principal of Greenwood High International School, said: “The response for summer camps has been overwhelming because children have been deprived of non-academic activities because of online classes. Parents too are relieved by the return of summer camps as it was a struggle for them to ensure kids don’t spend too much time on gadgets.”

He said they have noticed that many kids are still behind in their social development. “Summer camps help children interact with their peers and take part in activities that will boost their mental and physical health. Our summer sports camp in football, badminton, swimming and hockey has already started along with an online summer chess camp by renowned professionals. Children from class 1 onwards can spend their vacation productively here,” he said.