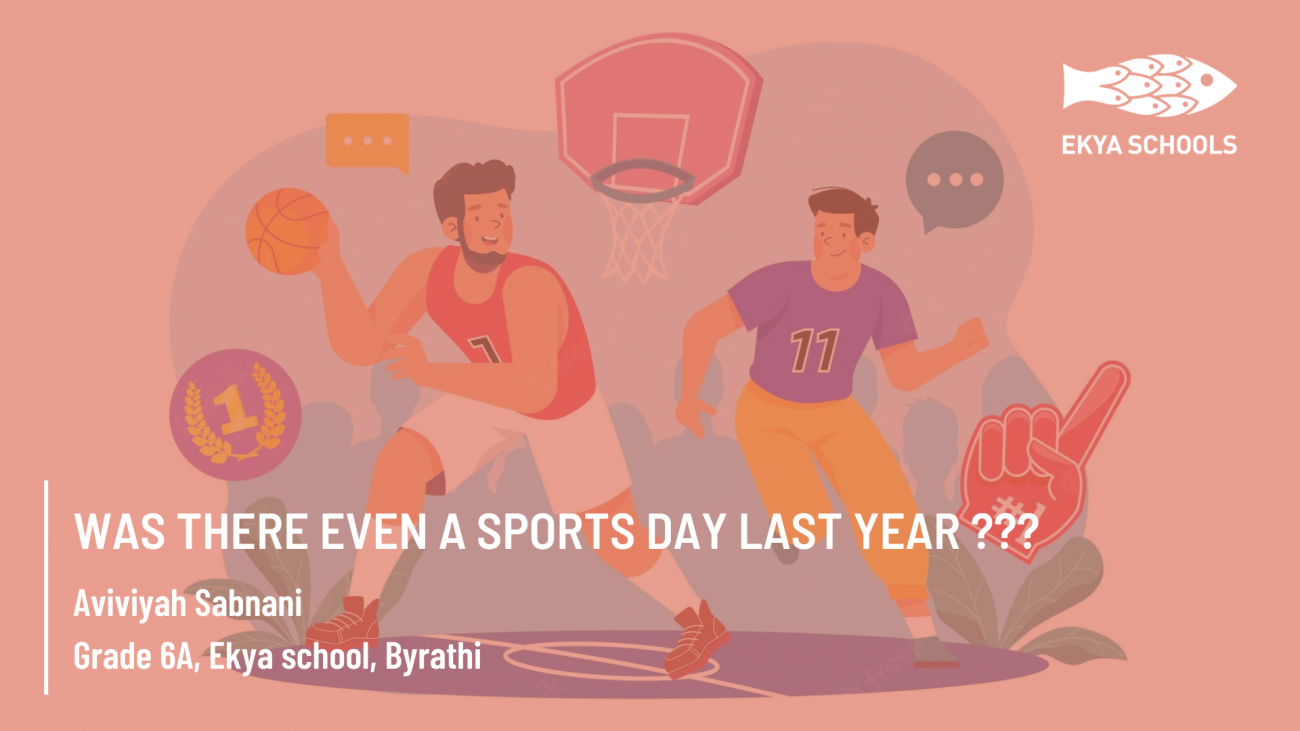 #StudentBlogger: Was There Even a Sports Day Last year??? By, Aviviyah Sabnani Grade 6A, Ekya School, Byarathi

Well, if there was one, I don’t remember it at all. I felt so much joy and happiness when the sports day dates were announced in the assembly, and my heart was soaring.

Sports day is one of my favourite days; making me feel free. This year was enjoyable as it was the first sports day in 2 years, and everybody was so excited. There were endless days of chatter and planning for this grand event. The only thing we weren’t pleased about was that there were classes in the first, fifth and sixth hours. But as the days passed, we soon forgot about it. Finally, it was Friday, November 11th. Well, we just got a tiny bit lucky. It was cloudy in the morning and was predicted to rain, so …. Instead of doing our first hour, we had to line up and go directly downstairs. YAY.

The races started with the Montessori class and slowly progressed from there. Everything was excellent and exciting. Everybody was cheering for their own house – which was quite a lot of noise. Grade 2 had one of the most exciting races. Those kids took sports day earnestly; they ran like professionals, fighting for the first position.

By the time Montessori, first, second and third finished their races, it was already snack time. We lined up and went to the classroom for snacks. Snacks break was exciting and suspenseful as we did not know who was winning. When we came down, the scores were written on the board. Vayu house was winning. That gave us all the energy to run well and win.

The fourth and fifth grades had their races together; they had the – running race, crab race, skip the hoop race and relay. It was exciting and fun to watch, just like the other races. After this was the most exciting part, OUR RACE. We participated in all the races. When seeing the others run, I thought it was fast. But when we ran, I realized how tiring and slow it was!

I thought I wouldn’t win anything, but to my surprise, I did. Wait, hold on …. I’m not going to tell you what I won just yet.

Wow. Time flies, doesn’t it? It was already lunch break. As we went for lunch, it dawned on us that sports day was still ongoing, which meant we would also be missing the fifth and sixth hours. YAY AGAIN. Lunch break was great, and when we came down, Bhoomi’s house was in the lead. Well, that sent all the homes on the run again.

The senior’s race caused a big sensation in the different houses, with each house cheering for its very own fast seniors. This race was critical as we knew the place that won would get a significant boost in points, causing that horse to win or come second at least. After this race, we were all waiting for the issues to be announced, But the teachers told us that they would announce the winner of sports day at the end of the day.

Last but not least – The prize distribution, Our head of school – Mrs Smriti Agarwal, gave out medals and certificates to the winners. Many people won from all grades – I won a gold and two silver medals. After that, Smriti ma’am congratulated us and asked us if we would like to do anything else. All at once, the whole school started chanting ‘Teacher’s race, Teacher’s race ‘.

And yes ! our wish was granted, the teachers ran, and they got medals and certificates too.

This was the best part of sports day – seeing the teachers run!

I loved sports day, especially this year, and I loved sharing my experience with you. Oh, and by the way, Vayu won with 900 points.