Next#StudentBlogger: The Future of Journalism by Meera Karthik, Grade 5, EJPN 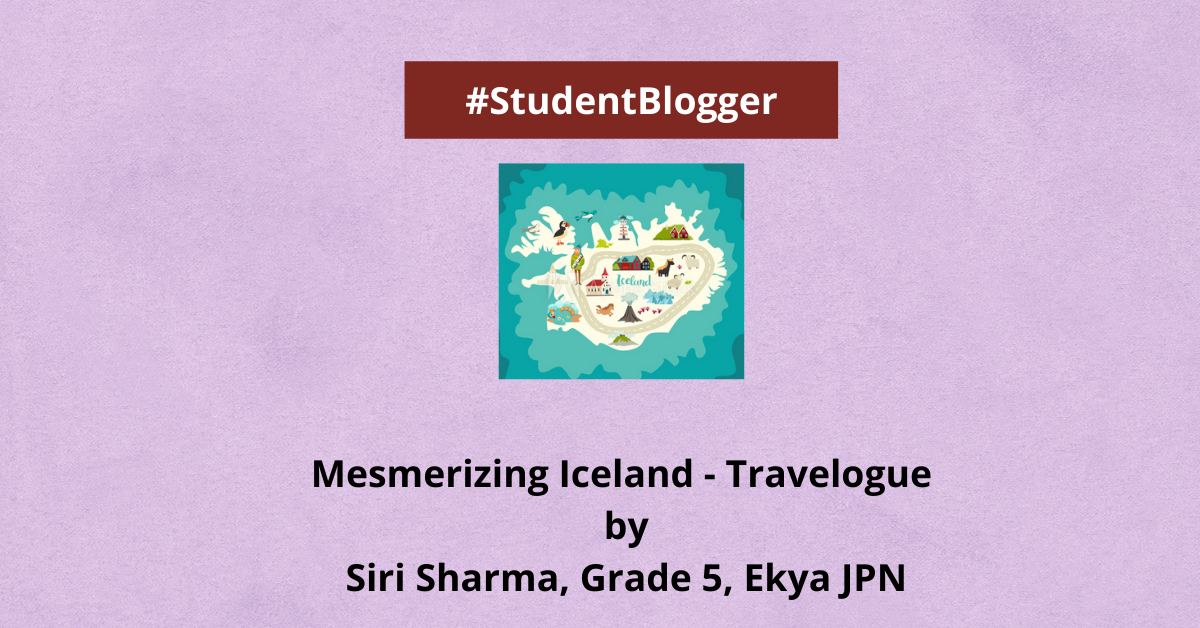 On the night of 21st December 2018, my parents and I left for the airport for our vacation in Iceland. When we landed in Iceland, it was the evening of 22nd December. When we got off the plane, it was so cold that I was shivering!! After we got our bags, we left for the Blue Lagoon in a local taxi!

Blue Lagoon is a place where there is hot natural earth water!! When we reached there, we changed into our swimsuits and we were ready to go! But first, we had to walk to the water!! There was a long pathway!! Since we were wearing only our swimsuits, it became extra cold!! But finally, when we jumped into the water, it was very warm! After we finished swimming in the water it was time to go to our hotel.

We went to our hotel on Laugavegur street in Iceland’s capital city, Reykjavik. Reykjavik is a clean and beautiful place. Laugavegur is the most famous street in Reykjavik

Iceland gets only about 5-5.30 hours of sunlight during the end of December! We used to leave our hotel for the tour at 8 am. But when we finished our breakfast and came outside, it was like we were traveling in the night!! It was so dark!! Sunlight would appear only by 10.30-11 am. Again by 4-4.30 pm, it would start getting darker.

On the second day of our trip, we went to the Pingvellir National Park, where the country’s parliament Alpingir was founded a thousand years ago. It is also a site of geological wonder as it has a rift valley between two tectonic plates – Eurasian and North American plates. It was so cool that we went between the border of two tectonic plates !! Also, that was the place where I experienced snowfall for the first time!!

Next, we visited two main places which represent that Iceland is indeed a place of ice and fire – Jokulsarlon and Hverir!!

Jokulsarlon is a super awesome glacier lagoon. The nearby place “the diamond beach”, seemed totally out of the world! There were so many huge chunks of ice crystals all over the beach!!

The “Black Sand Beach” was amazing with black sand and huge columns of basalt rocks. But this beach was scary!! It almost pulled me over to the water due to strong winds! It is always extremely windy at this place!! Iceland is considered the second windiest country on this planet.

Hverir, a geothermal field is filled with bubbling hot springs and gaseous fumaroles, in contrast with the cold Icelandic weather. It is a very smelly place and we were advised to stay away from super-hot mud fumaroles!

Iceland also has many beautiful waterfalls like Gullfoss, Skogafoss, etc. But we sadly could not play in the water as it was super cold.

Glacier hiking with my guide

While we were hiking, we saw pieces of ice that looked like glass, they had rainbow reflections!!

This trip was unique as I got to visit a huge ice cave and walk through a lava tunnel as well!! The ice cave was cool!! We had to wear crampons there as well so that we do not fall while walking on the ice. We went with protective helmets so that we do not get hurt. While walking inside the cave, there was a huge chunk of ice that was about to fall on my head!! Luckily, I moved towards the other side and did not get hurt one bit. The ice cave tour was a wonderful experience.

On the last day, we visited an old lava tunnel! It was super dark, so we went with torches. Our guide showed the actual darkness of the tunnel by switching off all the lights!! It was super scary! The lava tunnel was created due to a volcanic eruption a long time ago. The dried lava was very colorful, mainly shades of red, and formed many interesting shapes and structures. Guide told us that there were special bacteria in the lava tunnel feeding on minerals present in the lava. They looked like crystals and it seems that NASA Scientists are studying these bacteria.

The most memorable day of my Iceland trip was the early hours of 28th December 2018. At around 1 am while we were fast asleep, the hotel reception gave us a Northern Lights alarm call. We woke up immediately, wore our warm clothes, and ran downstairs!! We saw it! We saw it!! It was the Northern lights, also called Aurora Borealis!! The Northern lights initially started as green colored light and later so many rare colors like purple, red and yellow also appeared with so many amazing patterns, as if the lights were dancing!! And it lasted for more than half an hour! Then when it stopped, we went back to bed. I was super thrilled!!

After finishing our 10-day tour of Iceland we returned home, back to India 🙂 That was my favorite trip and a very memorable one as well!! I suggest you plan and go on a trip to Iceland!! That place is truly awesome, with no doubt!!!